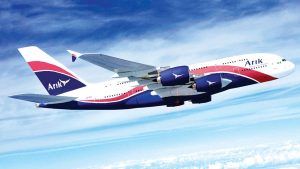 The Federal Government of Nigeria has shared an N4 billion aviation intervention fund among 18 scheduled and non-scheduled airlines.

Our correspondent learned that the grant was thrown open to all operators with valid air operating certificates (AOCs), and distributed according to the size of the carriers. The parameters, however, made some ‘dead’ airlines beneficiaries of the Covid-19 stimulus package.

The Presidential Task Force (PTF) on COVID-19, also placed a six-month ban on 100 Nigerian passport holders over alleged violation of safety protocols at the ports of entry. The committee, in a publication yesterday, made public the passport number of concerned citizens.

In response to the losses incurred during the lockdown, the Federal Government had last May hinted of a plan to bail out the airlines prior to restart. Flights resumed but nothing came in the form of a bailout.

Defending the Ministry of Aviation’s 2021 budget before the relevant Senate panel in November, the minister, Hadi Sirika, had said an N5 billion lifeline was in the offing for the industry.

The sum was a far cry in the estimate of both the operators and the lawmakers. The upper legislative chamber concluded that airlines should get as much as N50 billion for economic and safety reasons.

In-between the back and forth, the financial and operational challenges of airlines worsened. As an industry that depends on 100 per cent on foreign exchange, though earns revenue in weak naira (N500 to $1), keeping a respectable fleet of healthy planes became a major headache of operators, causing massive disruption and spike in fares during the festive season.

It was gathered that reprieve came the way of the airlines at the weekend, as the government disbursed the special bailout, though different from the proposed N27 billion soft loan of the Central Bank of Nigeria (CBN) through the National Economic Council.

Sources at the aviation ministry confirmed that the fund was in line with the minister’s earlier promise that the airlines would get N4 billion, while their regulators get N1 billion.