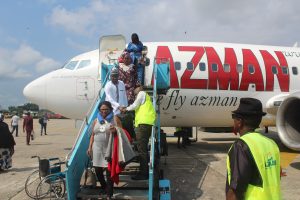 In the early ours of Tuesday March 16, the management of Azman Airline has announced suspension of its flight services to all destinations in Nigeria.

The management of the airline made this known, in a terse statement on social media monitored by our correspondents. The announcement said that the suspension of the flight services was not unconnected to the audit of its safety processes by the Nigerian Civil Aviation Authority (NCAA).

“Due to our strong stance on safety, @AzmanAir will be undergoing an audit of its safety processes by the regulators. In this regards, all our operations is hereby suspended. We are on our toes to restore operations within a short period. Kindly accept our apologies,” said the announcement.

Our correspondents gathered that it was not clear why NCAA is caring out audit of the airline, but Azman Airline had, had some incidents in recent times.

It was also gathered that the fleet of the airline may have depleted to just either one or two aircraft in the past few months.

It is reported that Azman Air was among the indigenous carriers that benefitted from the Federal Government palliatives earlier in the year. The airline reportedly received N500 million from the largesse.