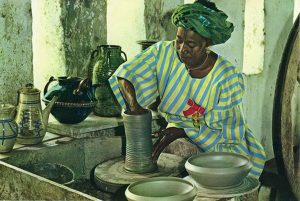 Born precisely around 1952 in Kwalli village, Abuja, Ladi Dosei Kwali was a Nigerian potter who excelled in pottery among women. She learned to make pottery as a child by her aunt using the traditional method of coiling.

Kwalli, who later bagged some national and international merit awards; Officer of Order of Niger (OON) and Member of British Empire (MBE), made large pots for use as water jars, cooking pots, bowls, and flasks from coils of clay, beaten from the inside with a flat wooden paddle. The arts were decorated with incised geometric and stylized figurative patterns, including scorpions, lizards, crocodiles, chameleons, snakes, birds, and fish.

She would impress patterns on top of the figures by rolling small roulettes of twisted string or notched wood over the surface of the clay, sometimes as horizontal banding and sometimes in vertical panels. The wooden roulettes consisted of small cylinders of hardwood, two or three inches long and a half-inch in diameter, notched with straight, oblique, or parallel patterns.

The earthenware vessels and decorative techniques have been dated back to the neolithic period. Following the region’s traditional method, they were fired in a bonfire of dry vegetation. Her pots were noted for their beauty of form and decoration, and she was recognized regionally as a gifted and eminent potter. Several were acquired by the Emir of Abuja, Alhaji Suleiman Barau, in whose home they were seen by Michael Cardew in 1950.

Michael Cardew, who was appointed to the post of Pottery Officer in the Department of Commerce and Industry in the colonial NigerianGovernment in 1951, established the Pottery Training Centre in Suleja (then called “Abuja”) in April 1952. In 1954, Ladi Kwali joined the AbujaPottery as its first female potter.

There, she learned wheel throwing, glazing, kiln firing, production of saggars, and the use of slip, eventually assuming the role of instructor. She made bowls with sgraffito decoration, which involved dipping vessels in red or white slip and then scratching the decoration through the slip to the underlying body, using a porcupine quill.

From her cultural tradition, where females were primarily responsible for pottery, Ladi Kwali’s ceramics became “art objects”. Ladi Kwali’s pots were featured in international exhibitions of Abuja pottery in 1958, 1959, and 1962, organized by Cardew. In 1961, Kwaligave demonstrations at the Royal College, Farnham, and Wenford Bridge in GreatBritain. She also gave demonstrations in France and Germany over this period. In 1972, she toured America with Cardew. Her work was shown to great acclaim in London at the Berkeley Galleries. The Abuja Pottery was renamed the Ladi KwaliPottery in the early 1980s.

In 1954, Kwali ‘s pots were featured in the International exhibition of Abuja pottery organized by Micheal Cardew. Kwali was awarded an MBE (Member of the Order of the British Empire) in 1963.

In 1977, she was awarded an honorary doctoral degree from Ahmadu Bello University in Zaria. In 1980, the Nigerian Government (from the Cabinet Office of the Federal Republic of Nigeria) invested in her with the insignia of the Nigerian National Order of Merit Award (NNOM),[14] the highest national honor for academic achievement. She also received the national honor of the Officer of the Order of the Niger (OON) in 1981.

Her picture appears at the back of the Nigerian N20 Nairabill. A major street in Abuja is called Ladi Kwali Road. The Sheraton Hotel houses the Ladi Kwali Convention Center, which is one of the largest conference facilities in Abuja, consisting of ten meeting rooms and four ballrooms. Her works are held in collections all around the world, such as Smithsonian National Museum of African Art, USA, Victoria and Albert Museum, and Aberystwyth University Ceramics Gallery, UK. She died on 12th August 1984.