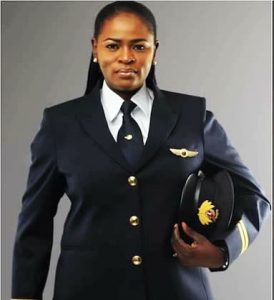 It is impressive to witness the league of African women in aerospace, and more importantly Nigeria is also blessed with numerous talents from all walks of life. A new benchmark has now been set by women of substance in the aviation sector.

In the global scene, more than 500 women are proudly admitted to being airline captains. One of such women in the history of aviation is Adeola Ogunmola Sowemimo, who has become the first Nigerian female pilot to work for Qatar Airways, and also the first to fly the Boeing 787 across the Atlantic.

Sowemimo is also the first Nigerian female pilot to fly the Boeing 767 Aircraft across the Atlantic. Her stardom filled in the airspace when she joined Medview Airlines in 2013 till October 2018. She was first enrolled as a ‘First officer Boeing 737’ classic, and was later upgraded to Boeing 767-300ER.

It is a fact that most women who excel in the aviation sector proved that a lady can be as good as a male pilot if she believes in herself.  It is not that surprising to hear a female pilot introducing herself as a pilot of an aircraft anymore, but just imagine how odd it seemed 20 years ago at least in Nigeria.

At the global scene, notable women have equally contributed immensely to the sector as pilots. In 1937, Sabiha Gökçen of Turkey became the world’s first female fighter pilot. Not only that she became the first-ever female pilot to participate in a national military operation. She was only 24 when she went on her first mission.

Celebrating Showemimo in this context is awesome as she set to being Nigeria’s Gökçen. Hailing from Ogbomoso, an ancient town in Oyo State, Adeola graduated from the Ladoke Akintola University, which is also based in the old city. After that she went off to the Sunrise Aviation flight school, a top professional pilot training school located in Ormond Beach, Florida.

She is married to Seunfunmi Olamilekan Sowemimo, they live in Orlando, Florida, southeastern region of the United States.