FROM CLEANER TO CAPTAIN

Muhammad joined the Aviation industry 24years ago as Aircraft Cleaner. He has now gotten his fourth bar to become a Captain. 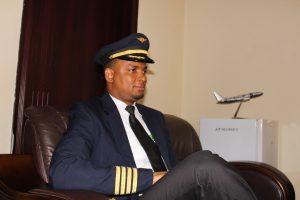 We’ve all stumbled upon inspirational quotes like “work hard in silence, let your success make the noise”, but how many times have we seen it come true? Mohammed Abubakar restores our faith in dreaming big and his story is bound to make you fight harder to achieve your goals.

Captain Muhammed Abubakar’s sojourn into the aviation sector began when he finished his secondary school and went to Kaduna in search of admission into Kaduna Polytechnic. Unfortunately, he went there late and could not get the admission he was looking for.

According to him, he searched for something to do to get going, so he got a casual job as an aircraft cleaner with Kabo Air in Kaduna. “It was during Hajj operation, and I was earning N200 per day, even though many believed that I wouldn’t do it because of the meager money involved. I was later employed as ground staff with the airline in Maiduguri.

Through my service in the company, I worked in almost all the units, except security. That helped me a lot in the aviation sector,”.  Along the line, Abubakar got employed as a cabin crew member after a solid performance at an interview

He later moved to Aero Contractors, in the oil and gas section of the company as a flight attendant, where he worked with their chartered services, as the company was then not into scheduled flight services. According to Abubakar, when Aero Contractors ventured into scheduled services, he gave some input, which made the then Deputy Managing Director of the company to take notice of him. “After that, we developed a good working relationship, and he’d seek my input on many things,” he said.

Abubakar recalled that when he received his first payslip at Aero, he was shocked, and even tried to return it, thinking it wasn’t his. “This is because my initial salary at Kabo Air was N17,000, and what I got paid in Aero was N170,000, so I couldn’t believe it,” he narrated. Instead of adopting a lavish lifestyle typical of the sector,

Abubakar decided to save and invest. “I joined a contribution system with my colleagues, and when it was my turn to receive the accumulated funds, there was a sizeable amount of money. So, I went to the managing director and sought his advice on my dream of training as a pilot.

He was so happy and supported me. That’s how I managed to sponsor myself for my private pilot license in Canada, which marked my take-off as an aircraft pilot,” Abubakar said. When Abubakar returned to Nigeria after the successful completion of his training, the issue of having a commercial pilot license came up, and he had no money. So, he went to discuss his dilemma with the deputy managing director, and the company assisted him to go to Canada to train for a commercial pilot license.

He was also sponsored by the company to go for his type rating training in Canada, which qualified him to be a pilot. After eight years in Aero Contractors, Captain Mohammed Abubakar joined Azman Air as a Co-Pilot in 2016; Having satisfied in all the certifications and Hour Rating Required; The Management at Azman Air upgraded him to becoming a Captain on 29th July 2018.

The road to realizing his dream has often been rough, and he even considered quitting. “But I was able to weather the storm, and here we are today,” he said.