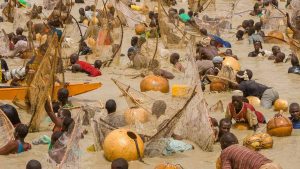 The Argungu Fishing Festival, observed annually in Northern Nigeria, is one of the most popular festivals in Africa. It originated in the area that includes today’s Kebbi State in about the 16th century before the time of Surame Gungu of Kebbi kingdom and the conquest of Kanta of Kebbi.

Presently, it is a four-day event that is marked by pomp and pageantry and draws national and international attention. Up until the festival day, it is believed that no fishing activities are carried out on the river throughout the year.

Originally celebrated as a religious festival, it was transformed in the early 19th century by Shehu Usman Dan Fodio, the ruler of Sokoto, when he stormed the Kebbi Empire during jihad and took control, he subsequently founded a village that he renamed Argungu.

The name, rather derogatory, means ‘those foolish people’ in the Hausa language. It was used in 1934 to mark the end of hostilities between the Sokoto Caliphate and the Kebbi Kingdom.

The festival usually takes place in Argungu, the capital city of Argungu Emirate Council. The geophysical feature is characterized by rivers (matanfada, mala, gamji), irrigation, and orchards (lambu in Hausa). The majority of fishermen are Muslims and farmers.

At the beginning of the major event, over 5000 fishermenand women gather close to the river and at the sound of a gunshot, they all dive into the river. The fishing equipment used is the  traditional nets and gourds made of the calabash. They

are joined by canoes filled with drummers, plus men rattling huge seed-filled gourds to drive the fish to shallow waters. Vast nets are cast and shoals of fish are harvested from the giant Nile Perch to the peculiar Balloon Fish. The person who catches the largest fish is awarded prize money of $7000 (some say $8000). In 2005, the winning fish weighed 75 kg and needed four men to hoist it on top of the scales, which is the biggest fish that has been caught in the festival to date.

Furthermore, there is canoe racing, wild duck hunting, barehanded fishing, diving competitions, and naturally, swimming. Afterward, there is drinking, singing, and dancing into the night.

The festival marks the end of the growing season and the harvest. One mile (1.6 kilometers) stretch of the Argungu River is protected throughout the year so that the fish will be plentiful for this 45-minute fishing frenzy.

Since then, the festival has grown into one of the most popular festivals in Nigeria and beyond. Conspicuously, it attracts a whole lot of non-Argungu dignitaries. Indeed, after the memorable visit of Sultan Dan Mu’azu, the festival began to attract a steady flow of similar followership from all over the country. Tourists and guests for the occasion trooped in large numbers from Europe, Britain, the United States, Russia, South East Asia, and neighboring African countries like Niger, Benin Republic, Cameroon, etc.

Gen. Yakubu Gowon together with Alh. Diori Hammani of Niger Republic was the first head of states to attend the Argungu festival in 1970. Since then the festival has been visited by all presidents of the Federal Republic of Nigeria.