KASUWAR KURMI: ONE OF THE OLDEST MARKETS IN NIGERIA 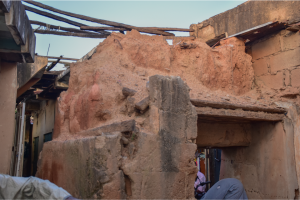 The Emir of Kano, Muhammadu Rumfa, was the first to set up stalls and sheds in the market and collect taxes. His reign had a great influence on today’s Kano economically, religiously, and socially.

Economically, the city emerged as a center of trade with the Maghreb countries of North Africa. He constructed the Kurmi market, thereby leading to the emergence of a very strong economic system in the city. It was as a result of these trading activities in Kurmi market that ancient Kano became part of the trading routes of the Trans-Saharan trade. The market became, in the course of the trans-Saharan trade, the source of what the world came to refer to as the Morrocan leather.

Apart from being the oldest in Kano State, Kasuwar Kurmi, is undoubtedly and unarguably one of the oldest markets in the West African sub-region. Historically, the market, which sits in the heart of Kano city (Kano Municipal Local Government area)was established some 600 years ago purposely for the slave trade. There are neighborhoods around it such as Jakara, Bakin Zuwo, Kwanar Goda, Kofar Wambai, and others. All of these neighborhoods are called  Bakin Kasuwa.

During the period of the boom in human trade, many stalls and sheds were set up in the market to keep slaves while awaiting buyers.

The Emir of Kano Abdullahi Bayero (1926 – 1953), modernized the market. He made a donkey station; This donkey station is no longer available except for the site where  Shabbabu Mosque was constructed. The donkey station is a roundabout where anyone who brings a donkey for sale, goes to the station and packs his donkey until he has finished his shopping or sold what he has brought. There are wells dug in this station to provide water for the donkeys, their sellers, and the buyers to utilize.

After that, Sarkin Kano Abdullahi Bayero further built modern market stalls, courts, police stations, post-office, and so on. He also built the Jakara bus station both for the sake of the market and for the convenience of the traders.

Although this market still has the same old stalls, it has a good shed, and it is well maintained. For example, there is only one group of booksellers, on the same line a group of caps sellers (Yan hula), The royal regalia line, There is also a line of horse adornment accessories vendors, and a line of perfume sellers.

Kurmi market is not like the usual modern market with a well-demarcated walk way. It is a maze of turnings and turnings that only those used to the market would understand. A stranger coming into the market on his own would end up embarking on a merry go round, ending up in the same place where he/she started the journey.

Kasuwar Kurmi today serves as a tourist attraction center in kano. It is like a sanctuary of the kano heritage. It could be described as the bank of the state’s artifacts.