AFTER 43 YEARS IN SERVICES, ONE OF THE NIGERIA’S LONGEST SERVING AVIATION OFFICER WENT INTO RETIREMENT 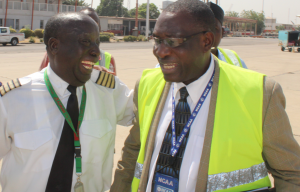 One of the Leading and most Experienced Pace Setters in the Nigerian Aviation Industry, Captain Sylvester Dadi retires on 14th January 2020 after 43years of Service.

He operated his last flight; ZQ 2313 from Lagos into the Mallam Aminu Kano International Airport around 4:12 pm and he was welcomed with a Water Salute.

The Members of Staff at Azman Air, Families, and Friends were all cheering and chanting of his meritorious achievement as he disembarked from the Aircraft.

The Plateau State Born Captain was overwhelmed with the crowd who came to celebrate with him and he was treated to a spree of photoshoots.

A Dinner was organized to mark the Retirement and his Colleagues, Family, and Friends have a lot to say about him.

Alhaji Hadi Abdulmunaf – Azman Air Accountable Manager has a good testament to the Energy, Determination, Hard work, and Passion Capt Dadi possessed towards his job.  He also appreciated how he contributed his proficiency and professionalism to the success story at Azman Air today.

Captain Ibrahim – Azman Air Director of Flight Operations regarded Captain Dadi as a Reliable Man, an Inspiration and Role Model to Younger ones. The World will be a Better Place if Employees can be as Hardworking as he is.

Capt Habib, Azman Air Chief Pilot confirmed it is a great opportunity for him to fly with Captain Dadi. He also emphasized how much he has learned from his Tremendous Experience

Captain Tijani a Pilot at Azman Air cannot express his Excitement for the opportunity he had to share the cockpit with Retired Captain, He reiterated that he has impacted him not only as a Pilot but as a Husband and Father. He mentioned that during Capt Dadi stay at Azman Air, he showed him that Hard work, Dedication, and Loyalty Pays.

Captain Sylvester Dadi is a True Patriot, He joined Azman Air in 2017 and He has managed to write his name in GOLD in our Hearts, in the Heart of Nigeria Aviation Industry and the World Aviation as a Whole

We wish him all the Best.