Some Amazing Facts About Aviation 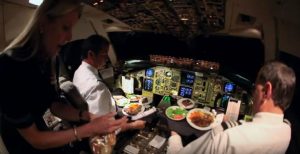 The aviation industry becomes part of our daily lives, since we all know its importance.  This piece explores some amazing facts about the sector, which you may not know before now. The facts are not sacrosanct, you may also add up your own since we all have our respective views about the aircraft, the crew, the pilots and even the experience of flying different planes to endless destinations.

Let’s preview some of the interesting facts as gathered by our correspondent. They are as follows:

Boeing 747 is the most well-known wide-body commercial airliner and cargo transportation aircraft frequently referred to as the Queen of the Skies or the Jumbo Jet. This airplane is famed because it was the first huge body aircraft ever produced. A Boeing 747 is made up of six million parts which are made to be all controlled by a few pilots sitting up front with switches and buttons under their fingertips.

Acrophobia is defined as a fear of heights. Unlike a specific phobia like aerophobia – fear of flying -and other specific phobias, acrophobia can cause a person to fear a variety of things related to being far from the ground. Depending on the severity of the phobia, an acrophobic person may equally fear being on a high floor of a building or simply climbing a ladder.

Another interesting fact about a Boeing 747 concerns its engine weight. This aircraft is one of the most popular and beautiful airliners in the sky. A Boeing 747 is made up of six million parts and one of them is its engine which weighs almost 9,500 pounds (4,300 kg) and costs about 8 million USD.

The busiest commercial airport in the world is the Hartsfield- Jackson Airport (ATL) in Atlanta,  with more than 970.000 airplane movements a year. Based on its passenger traffic this airport has been the busiest from  1998, and by the number of landings and take-offs – since 2005. The Hartsfield–Jackson has held its ranking as the world’s busiest airport in 2012, too, both in terms of the number of passengers and the number of flights. In the year alone it was visited by95 million passengers (more than 260,000 passengers daily).

Boeing 747 is not only one of the world’s most recognizable aircraft, and the first wide-body ever produced. Another fascinating fact about this aircraft is that the maximum speed of a Boeing 747 is 955 km/h.

Though the aviation sector is growing rapidly, according to the statistics only 5% of the world’s population has ever flown on an airplane. Many people, especially from the underdeveloped regions, have never ever been in an aircraft and it is not likely that they will have an opportunity to fly in all of their lives. However, at the same time a small minority of the world’s population fly very regularly.

Tom Stuker has taken the term “frequent flyer” to completely new heights this year, logging just over 1.000.000 miles in 2012 all on United, all in first class. Generally, he has travelled over 10 million miles. The 59-year-old Chicago native and New Jersey resident says he’s flown a total of 13 million miles, much of that in his capacity as an independent consultant and sales trainer for automobile dealerships around the world.