As Buhari rolls out panacea to plane crashes in Nigeria 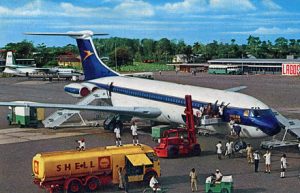 As agitation continues for the non-payment of pensions owed to staff of the defunct Nigeria Airways of almost twenty years, which was approved by President Muhammadu Buhari, a voluntary think-tank of the ruling All Progressives Congress, the APC Legacy Awareness and Campaign, recently reviewed the Aviation Sector Roadmap of the Buhari administration.

The agitators recount that although a significant portion of the investment into the Aviation Sector has been focused on resolving issues and bridging gaps inherited from previous administrations, and also the reconstruction of the runways in Abuja and Enugu that were also long overdue, but neglected by previous governments, should all be put in place. This, according to the dissenters, should have been made over the decades.

According to them, “Under President Buhari’s watch, the Nigerian College of Aviation Technology (NCAT) has acquired several new training aircraft and has been recognized globally by the International Civil Aviation Organisation. Among other things the NCAT now has a brand new Boeing 737 Full Flight Simulator, as well as a fully automated fire and Smoke Aircraft Training Simulator, which now means that Nigerian personnel no longer have to be sent to Cameroon for training on tackling aircraft fires and smoke.

“The Accident Investigation Bureau (AIB) now has a world-class Flight Safety Laboratory, which means that Airplane Recorders, popularly known as ‘Black Box’, no longer have to be sent abroad for analysis. Furthermore, the AIB is now actively providing technical support and services to other African countries, including assisting Sierra Leone to set up its own Accident Investigation Agency, in 2021.

“On the matter of the new private-sector-led National Carrier, the Minister of Aviation has assured that the establishment process is still on course, with a target commencement date for operations in Q3 2022. In May 2021, President Buhari approved the designation of the 4 major International Airports in the country as Special Economic Zones. The procurement processes for the establishment of an Aviation Leasing Company, a Maintenance, Repair and Overhaul (MRO) Center, and an Aerospace University are also all ongoing.

“To mitigate the negative impact of the Coronavirus pandemic on the sector, the Federal Government in 2020 released the sum of 5 billion Naira in bailout funds, which was shared amongst airlines, ground handling companies, travel agencies, flight catering services operators, and other stakeholders”.

FLY SAFE reports that the aviation sector roadmap of the present administration includes among others, the Establishment of an Aerospace University, Designation of 4 International Airports as Special Economic Zones, Upgrade of Accident Investigation Bureau (AIB), and the Nigerian College of Aviation Technology (NCAT).

In a statement issued recently by the APC’s think-tank, which is jointly signed by a presidential aide and Youth Representative in the APC’s Caretaker Extraordinary Convention Planning Committee CECPC, Barrister Ismail Ahmed, former National Publicity Secretary of the party and current Editor-in-Chief of the party’s magazine, the Progressives, Mallam Lanre Issa-Onilu, another presidential aide, Mr. Tolu Ogunlesi and Director General of the Progressive Governors’ Forum PGF, Mr. Salihu Moh. Lukman reads; “Since the launching of the Aviation Roadmap, the Ministry of Aviation has focused on implementation. In terms of infrastructure, the new Terminals of the Port Harcourt, Abuja, and Kano International Airports, inherited from the previous administration, have been completed, while the new Lagos Terminal is very close to completion. Brand new Runways have been constructed at the Abuja and Enugu International Airports, in 2017 and 2020, respectively.

“More than a dozen airports around the country have had Low-Level Windshear Alert Systems (LLWAS) installed, to improve flight safety. Investigations revealed that the Sosoliso and ADC plane crashes of 2005 and 2006 respectively were caused by the absence of LLWAS in the airports. The Lagos and Abuja Airports have had the Category 3 Instrument Landing System (ILS) installed – which provides the capability for landing safely and accurately in conditions of near-zero visibility. Another 3 Nigerian Airports have been scheduled to benefit this year.

What bothers everyone, more especially the agitators and the industry players is the lackadaisical approach of roadmap and all other issues, our correspondents reliably gathered.