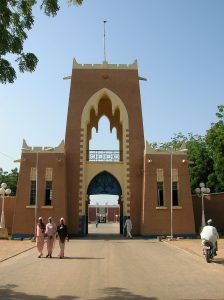 When Emir Rumfa became Emir of Kano in 1463, Kano was at its prosperous peak interns of socio-cultural, political, economic as well as religious development. In his desire to facilitate the aforementioned developments, Rumfa decided to expand the city. He resolved to build a new administrative city with the befitting palace on the outskirts of the city.

After about a decade of continuous delibrations between Rumfa himself, local town planners, architects, and builders. The site layout and form of the proposed new city palace were selected.

During the construction period, Rumfa was said to have temporarily lived in his personal residence popularly known as Gidan Makama. A house was built by Sarkin Kano Abdullahi Burja (ruled 1437-1452) and gave it to Muhammad Rumfa who happened to be his favorite grandson and was holding the title of Makaman kano.

Kofar Fatalwa is located in the North-Eastern part of the palace and was designed to have access to the Kano city Central mosque.

On the other hand, Kofar Kwaru is located in the North-Western part. It was designed so as to have access to the famous Kurmi market. Horses stable, palace officials such as Shamaki, Dan Rimi, and Sallama are located in this section.

Ecologically, the variety of shrubs and hedges in the Sheka help in reducing the extremeness of heat, wind, audibility, and glare. They also reduce the effects of Sahara dust to a considerable extent, thereby making the cikin gida thermally comfortable. Parts of them are used for growing some fruits and vegetables for the royal family.

In summary, the layout of the Gidan Rumfa was specially adopted to give maximum security as well as visual and acoustic privacy to the cikin gida.

Although traditional institutions now, do not have defined roles in the Nigerian Constitution, Gidan Rumfa continues to play Significant roles in different aspects as follows:

Locally, Gidan Rumfa serves as a local court where people come on a daily basis, all with different complaints seeking intervention.