ZUMA ROCK: THE MONOLITH INSELBERG WITH A HUMAN FACE 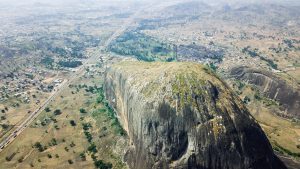 Zuma Rock, the monolithic Inselberg with a human face, is in Madalla, Niger State, to the North of Abuja. It was once described as the unquestionable watchman of the F.C.T. It is the sandy concealment that hangs like a haze over Zuba Town. The other mountains in and around it stays a considerable distance from it, which the Zuba people see as a form of respect being paid by the other mountains to Zuma Rock for its royal presence in the locality.

Zuma Rock was first located in a thick forest by the people of Zuba and the Koro in the 15th century when they settled around the Rock. The Zuba people named the rock, “Zumwa”, which means “the place of catching Guinea-Fowls”. Thus, the name “Zuma” was derived from this name. On getting to the forest, they settled within a mile radius around it and constructed a couple of settlements. On discovering that the rock had strong spirits, they worshipped it, offered constant sacrifices, and organized festivals in honour of the rock. Thus, within its environment, this rock is regarded as the strongest idol, both for its size and strong spirits. Over time, it has been used for defensive purposes by the natives of Gwari against invading neighbouring tribes.

Zuma rock has natural contours which project the image of a human face with a visible mouth, eyes, and nose.

The rock was used by the natives of Gwari as a defence against any external force that may want to invade their community.

The Rock is twice as high as the Uluru Rock in Australia, and more than four times as high as Nigeria’s tallest building, NECOM House.

Zuma Rock reflects a beautiful and special natural rock formation. It provides a good environment for picnicking and relaxation.

It is believed to possess magical powers, which has made enemies powerless and provided the Gwari natives with a hiding place.

During the raining season, the apex of the Zuma Rock catches fire while it’s raining.

It is believed that the Rock sits on a large expanse of water, which if allowed to flow out, has the capability to cover a large portion of land.

WHEN IS THE BEST TIME TO VISIT ZUMA ROCK?

Visiting Zuma Rock between April and October, which marks the rainy season in central Nigeria where the rock is situated, would afford you the opportunity of seeing the much-talked Zuma Rock Fire, as the apex of the Rock catches fire under heavy rainfall. Over time, this has remained one of the wonders to behold.

HOW TO GET TO ZUMA ROCK

The Nnamdi Azikiwe International Airport, Abuja is close to the rock. Taxis are available to drive tourists from the Nnamdi Azikiwe Airport to Zuma Rock. The journey takes Less than 30 minutes.

THINGS TO DO AT ZUMA ROCK

To avoid any hazard and ensure your safety, you should be armed with items like climbing rope, helmet, and hiking shoes.  Ensure that you have an expert climber by your side.

Join a group of rock climbers to go hiking and mountain climbing. Climbing the rock takes about 5 hours and it gives you the opportunity of having an aerial view of Abuja City as well as its environs.

For first time climbers, it’s advisable you c limb the Rock through the East side. Climbing the mountain can be a daunting challenge but with adequate preparation, you’re good to go.